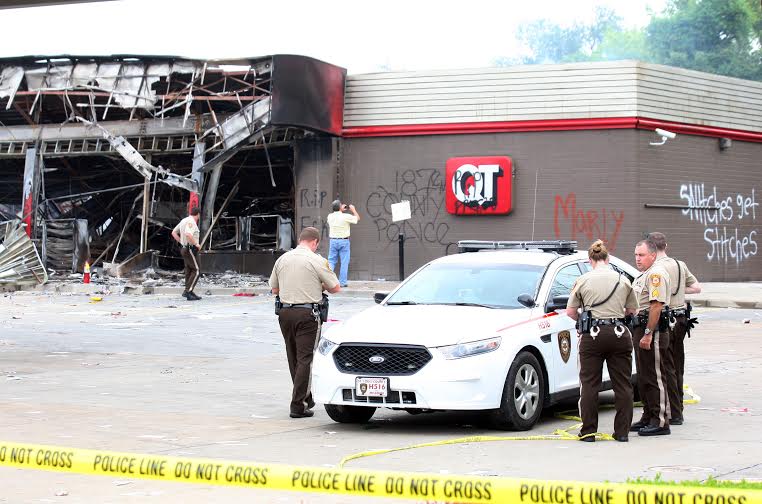 From afar (prison), I see that the trajectory of tensions in Ferguson is spiraling towards recuperation and cooptation. This is the same old maneuver and actors we see time after time. I’m specifically speaking of actions of so-called black leaders and black organizations, namely, the Nation of Islam (NOI) and the New Black Panther Party (NBPP). These organizations and so-called black leaders into maintaining the status quo so they can continue to profit off of the misery of the excluded financially and by gaining acceptance into the ranks of the state, and to be seen as the go-to folks when any disturbance happens in the black community. They must be challenged. Their working with the state to quell and control the rage of the excluded, and to protect property puts them in the camp of the exploiters and oppressor (the state), and no compromise with them is possible. Anyone who puts themselves between the cops and those that rebel is a collaborator of the state.

In Cincinnati at Timothy Thomas’s funeral, black political officials spoke of “restoring civil peace.” Rev. Damon Lynch III, a member of Cincinnati’s Black United Front (BUF) chapter called on several city officials to be fired, adding, “there’s enough violence in our city right now without us adding to it.” Kweisi Mfume of the NAACP called for change in the city’s power structure but urged the youth to “remain calm.” Jalil Muhammad of the NOI said, “Don’t get angry and tear up your neighborhood. Get angry and register to vote.” How pathetic. As if black youth registering to vote, change a few faces in city government, fire a murderous cop, and remain calm is going to change anything. “They are in this for four things only: reputation, power, politics, and money,” stated one black youth in Cincinnati. The same sentiments were expressed in Ferguson as well. These neo-kolonial puppets have attempted to reframe the narrative by making those that rebel into the perpetrators of violence when in reality it is the state that are the (legal) monopolizers of violence. The state (cops) are systematically executing black folks.

Also, in Ferguson, the NOI and NBPP called for women to go home. This is an attempt to erase black women from the history of militant struggle by associating militancy with black males, essentially perpetuating the patriarchal notion of women as defenseless nurturers and non-stakeholders in their communities and refusing black female agency. It should be obvious to anyone who can think that these people are tools of the state.

This attempt at recuperation and cooptation is not only relegated to the outside. The same goes on in the prisons. Any time there’s resistance on a collective level, out of the woodwork comes the recuperators and apologists attempting to talk down those that are rebelling. And it’s always those that hold some amount of prestige in the prison and have friendly relations with prison officials, whether it be religious group leaders, drug dealers, or gang members. They must be confronted as well by those of us on the inside.

The point is that we must come up with methods to neutralize these agents of the state. They are the main roadblocks in transforming riot into insurrection and revolution. All I know is that in order to destroy this civilization, we must confront these challenges boldly. We must also remember that these groups are homophobic, conservative, and unrepentant capitalists. There is no way around it: they are the enemy. They are statists.