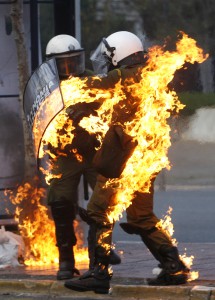 Historically, domestic social movements, no matter their theory, have adopted a practice of the two approaches. For instance, the Black Panther Party – which was a revolutionary nationalist organization with a Marxist, Leninist, Maoist orientation – degenerated into a reform party when it began to participate in state elections, as did most of the organizations of the most revolutionary period in america since the 1800s. Revolution is radical and being radical means getting to the root of things and making changes to bring about REAL liberation. That’s revolution.

In essence, these organizations attempt to use the laws of the state (human rights laws) and moral persuasion to bring about better conditions for prisoners and free them in some cases. The tactics of these organizations are within the prescribed limits devised by the state. Instead of destroying the system and hierarchy, they religiously adhere to this way of thinking and practice. Reform only strengthens the state, continues the status quo, causes assimilation and more misery, because in reality nothing really changes. The groups’ sense of social justice is strictly limited to the capitalist laws which are designed to defend the state and prevent any real social change. Anarchist revolution imparts a consciousness so that people can get past the superficial/symbolic and do not ask folks to petition the state to change itself in response to moral rebukes, as reform does, but rather, to build an alternative by fighting the state and all forms of hierarchy and domination. Capitalism, prisons, hierarchy, and all the fucked up shit this present world has to offer will forever exist unless the present mindset of society radically changes. The only outcome activists, abolitionists, prisoners, revolutionaries, etc can look forward to is reform, which translates into more of the same bullshit. Nothing short of destroying this muthafucka is going to bring about radical change. We’ve got to get this in our fucking heads.