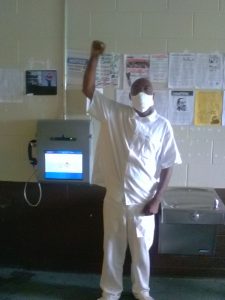 On December 16th, 2021 I was considered for parole during an open hearing. I was denied and hit with another 5 years before being considered again for parole. The reasons given to my attorney and supporters, who attended the hearing on my behalf with certificates of achievement and the many letters of recommendation from supporters, as well as my employment plan which was in proper order, was that I had disciplinary citations for refusing to work and an assault on a correctional officer who had been harassing me. (That correctional officer was subsequently fired for smuggling contraband into the prison.)

My attorney and supporters also sat in on other prisoners’ hearings taking place that day, and they say that no one was granted parole on this day. Some of these prisoners had disciplinary free records, support systems, etc. but still were denied parole.

I’m angry and bitter about the denial, but not really surprised about it. The Alabama Parole Board has been in the news lately about the refusal to grant parole to prisoners who have been incarcerated for 20 to 30 years or more and the racial disparity in who gets parole and who doesn’t. Last fiscal year, 23 percent of white prisoners were considered for parole, but only 9 percent of black prisoners. In fiscal year 2017, 54 percent of parole requests were granted. This was a high rate for Alabama. By the fiscal year that ended in June, the approval rate was just 15 percent. So far in fiscal year 2022, the rate is 10 percent. The current parole board is led by Leigh Gwaffney, a former prosecutor. Other members include a former probation officer and a state trooper. Victims of Crime and Leniency (VOCAL), an influential victims group, sends volunteers to testify against nearly every prisoner up for parole. A representative from the State Attorney General’s office does the same.

Only 4 of the 31 prisoners up for parole in late September were granted. Just 29 prisoners – representing 8 percent of requests – got parole that month. It really does not matter what one has done while incarcerated to rehabilitate themselves – they are being denied. The reality is that the denials are about revenge, racism, the housing of bodies for social control, and profits for the state (slavery).