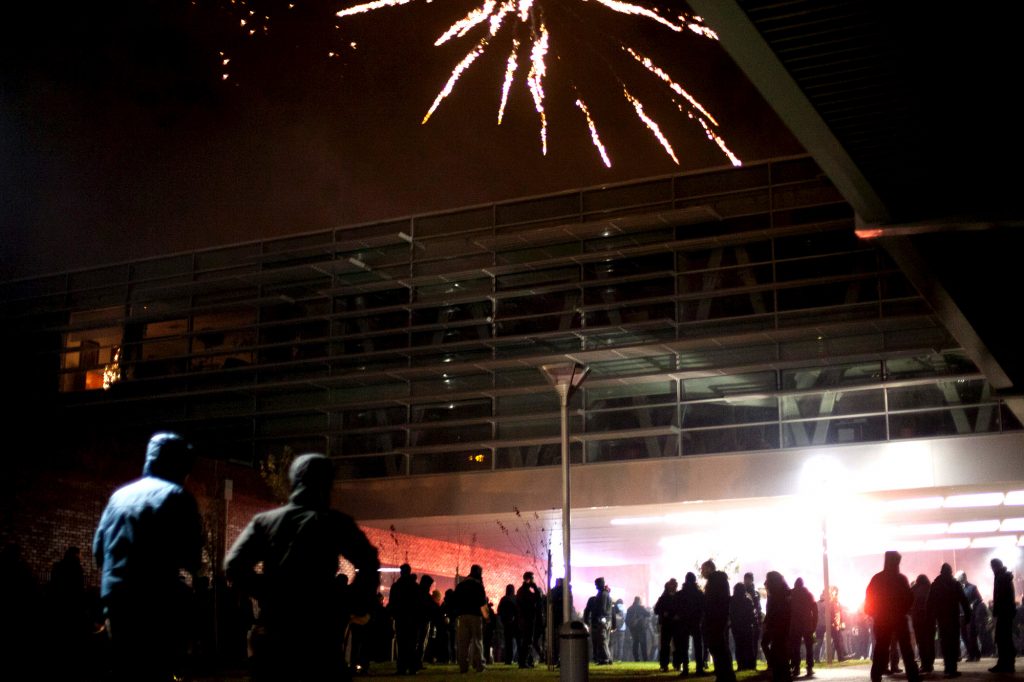 A new year, same shit! I’m not really a writer and don’t really like writing, and don’t have anything in particular to write about, so I’ll just put things down as it pops in my head.

Lately, my mind has been troubled about a lot of things and I do feel compelled to write something. One is how we keep going for the same old stuff that power be putting down. It’s really depressing when I see that even some anarchists, who should know better, decry the election/selection of Donald Trump instead of Hillary Clinton. Don’t we realize that Clinton is just another piece in the power matrix and that she would only continue that status quo of power’s domination?

Right now as I write I’m sitting in a single person cell freezing. It’s in the low 30s tonight and there is no heat. I’ve been doing exercise to stay warm. Now I’m tired and decided to attempt to write something coherent and meaningful. I’ve been in this cell since January 4, 2017, allegedly for discussing actions planned for January 20, 2017 with a comrade on the east coast in a letter. They are calling it a conspiracy. Then, a cell phone was found in my property by the riot squad, who has been deployed here at Holman for the last couple of months in an attempt to regain control and restore order to a population that has proven to be tired of order. But since I’m an outlaw, I’m not tripping.

They’ve not allowed me to keep any letters and there are a few I haven’t had the opportunity to answer, so you know why you haven’t heard from me. Shit is so tight here, one never know what’s what, but I’m loving it all the same because it’s more difficult for the pigs than it is on us prisoners. Nothing runs how it was designed to operate. The building is falling apart thanks in large measure to the constant sabotage. And believe me, it’s filthy here in the lockup. They (pigs) refuse to allow us to sweep and mop our cells. The floors are grimy, when you wake up in the morning there is a large puddle leading from under your bunk into the middle of your floor. You can’t even get the cell runner to give you a mop or broom and this causes those locked inside the cells to throw feces and urine on them. Now, there is more beef between prisoners that can overflow back into general population between different cities and/or gangs. The runners are picked by the pigs and only those prisoners that are submissive towards them are allowed to be runners in the lockup. Those that they can tell not to assist those locked in the cells.

I was just released back into general population on January 12, 2017. Just since the small time I’ve been in lockup and back out there has been a couple of changes. Guys are now complying with some bullshit rules that are arbitrarily made to harass us. Everything must now be off the top of all locker boxes, nothing under the beds, only one laundry bag of clothing, no tents, and a host of other bullshit rules.

Now, if one has been locked down for a number of years you most likely have accumulated a large amount of clothing that takes more than one laundry bag to hold, from packages family and friends have ordered for you from one of the sleazy, exploitative vendors. Anyhow now some pig who doesn’t have to live in the prison days, months, years or decades like we do comes in telling us we can’t have a cup or bowl on top of our locker boxes. Fuck that! We have to live here, not them, so they shouldn’t have a say in how we store our property. And of course, we will have more than one laundry bag of clothing, and if they would have made bigger locker boxes or put shelves in like they are supposed to we would have a place to sit our cups and bowls. But they don’t care about that, just follow the rules. Power and domination is their kick.

Guys are saying ok, we’ve been in compliance with all your new and petty rules from wearing arm bands, clean shaven, properly dressed, stuff off the boxes, etc., but now you want to come in and take our shit, harass us daily, shake downs, etc. But we can’t get something as simple as the temperature adjusted on the shower water, latches placed on lockerboxes so we can secure our property. And no, not all my property will fit inside the lockerboxes. I have thirty years of accumulation.

So, just last night the Sergeant and two COs attempted to enter the dorm and was stopped at the door and told that there would be no shakedowns in C-dorm. And now, there is a non-compliance demonstration, no work, no nothing, being organized by us prisoners. I don’t know if it will begin on January 20th. No date has been set, but that’s what we are shooting for the non-compliance to begin. Since the pigs want to harass us, we are going to give them something to do. You won’t be around to harass us because your ass is going to be slaving. This has nothing to do with prison slavery, but if they want to harass us, we are going to harass back.

And now, they (Alabama Department of Corrections) are transferring a hundred or so prisoners to Texas. They are saying that they are shipping some to Texas to alleviate the overcrowding, but that’s not true. The real reason is because they have lost control and can’t handle the rebellious prisoners here. This is not the first time they have done this. They’ve shipped and locked up some prisoners in an attempt to change the atmosphere here from one of rebellion to one of submission by bringing new prisoners here, but it ain’t working.

They’ve instituted constant lockdowns or controls on movement since March of 2016.

A few months ago all things seemed possible and still do. We need folks on the outside to keep up the pressure. Continue to demonstrate, drop banners, communicate with prisoners, and sabotage. The time is ripe for insurrection in here and out there. Hopefully, we can halt the advance of those who think that negotiation with the state is the road to go down. In here, they have missionaries coming in and serving food, holding talent shows in the dorms, etc. to quell the disorderly prisoners. We need hacktivists to be targeting DOCs, attacks on DOC offices, etc. Let your imagination bloom.

I know I’m all over the place, but that’s how my mind is functioning these days and we should be all over their asses. Let’s not let them go unchallenged. And let’s not divorce the struggle against prisons from the overall struggle against authority and domination. Civilization sucks! Why would anyone in their right mind want to continue with it?!

It boils down to one thing. This civilization must be destroyed. Nothing short of its total destruction will do.

I just finished reading the “Vampire Academy” series – well, three of the novels – and find that it’s really good. It’s a little different from the classical vampire novels. There is a caste system that these vampires follow. You have the Royals who are vampires (acceptable), the Dhampirs who are the guardians/protectors of the Royals. Dhampirs are a mixture of humans and vampires. Then you have the Striogi (those that never die) who tries to wipe out the Royals who are Moroi. What’s ironic about it all is that the Royals (Moroi) who work magic have allowed for Royals to fight the Striogi (that’s the job of the Dhampirs, remember). It reminds me of those who refuse to use violence under and circumstances. Oh yeah, some Dhampirs are called “blood whores” because they allow the Royals to feed from them (drink their blood). But what’s so enjoyable about the novels was one of the characters – Rose Hathaway, who is a Dhampir and in training to become a guardian, one who must sacrifice all personal desires for the Royal whom she has been assigned once she graduates. Rose is a rebel and turns every rule that the Royals and their Princess has established upside down. She is constantly challenging the way things are and in the third novel actually gets the guardian and Moroi Royals to fight together, with the Moroi using magic, which is forbidden.

At first, I didn’t think it would be so good. Thought it was, you know, for young adults. Check them out if you can. It’s a mirror image of how things play out in real life.