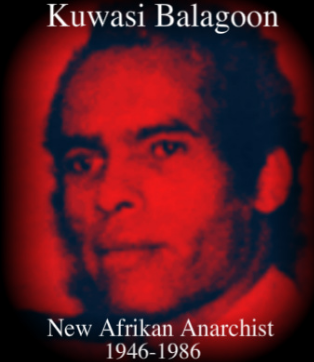 [Note: December 2016 marks both what would have been Kuwasi’s 70th birthday and the 30th anniversary of his death (murder) from AIDS-related illnesses while serving a life sentence on charges related to the robbery of a Brinks armored car undertaken to fund guerrilla activities.]

I became acquainted with Kuwasi Balagoon in the 1990s through his writings and the writings of revolutionaries that knew and fought alongside him. What is clear is that Kuwasi had an intense love for New Afrikan people and all oppressed people, and an equally intense hatred for racist and oppressive authority, and dedicated the bulk of his life in defense and liberation of all oppressed people. First as a member of the Central Harlem Committee for Self-Defense and later as a Black Panther and soldier within the Black Liberation Army. Soldier is really a misnomer, because a soldier is one who follows orders and the dictates of authority without question. And that wasn’t Kuwasi. We see that Kuwasi was rebellious as a young kid and later in his stay in the military. Kuwasi can best be defined as a warrior who lived to fight.

Sundiata Acoli, a comrade of Kuwasi’s within the Black Liberation Army, wrote that if we had read Kuwasi’s poem “I’m a Wildman” we would know Kuwasi, because he was a wildman – and that we need more of today. Sundiata also wrote that Kuwasi hated authority. I don’t know when Kuwasi officially or theoretically became an anarchist, but it’s clear that he was always an anti-authoritarian. He exemplified that through the numerous actions he carried out, from bucking in the military to the numerous prison breaks after being captured, which one isn’t supposed to do simply because authority says you should. It’s against the law, right?

Well, Kuwasi didn’t give a flying fuck about the law. He understood to really be free, one must act outside the law and destroy the lawmakers and their authoritarian institutions. Kuwasi’s trial statement says it all – it’s brilliant, defiant, and clearly shows what we should be about. I’m sure Kuwasi caught a lot of grief and heartache for becoming an anarchist because it’s seen as a white thing, just as Ashanti Alston spoke about. But I’m sure Kuwasi said fuck you to those who criticized him for being an anarchist.