Some Things to Do 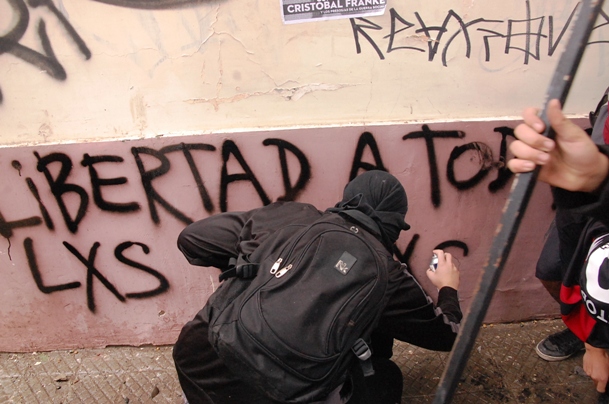 Recently, I’ve had more than one comrade ask me how could they show solidarity to rebels behind prison walls. I got the sense that they are somewhat frustrated and that the work they are doing seems unproductive and personally unfulfilling. Believe me, I and other prison rebels have the same frustrations about our efforts and work not having the desired effect we would like. But to be honest I want you comrades out there to know that the education you all do in the prisons by way of zines and books are phenomenal. The relationships comrades are building with those of us on the inside, the financial support, love, and permitted acts of solidarity is very very important. But we need some stronger stuff if we really want to do some damage to this colossal human destroying system.

From the inside, prisoners have historically used mainly 5 methods: hunger strikes, work strikes, riots, lawsuits, and letter/phone campaigns to address the inhumane conditions prisoners exist in such as pig hostility, solitary confinement, medical neglect, absence of educational/rehabilitation programs, unsanitary conditions, etc. But none of these struggles were about abolishing prisons, but reform of prison. Most prisoners believe that prisons and police are needed, just in a more humane way. Sad, but true.

From the outside, those who support prisoners, even anarchists, who claim to want the abolishment of prisons mainly use 3-4 activist type methods in support and solidarity with prison struggles. These methods are letter/phone campaigns, lawsuits, rallies, and public education. All of these are permitted methods that do little to really challenge the legitimacy of prisons, and they certainly don’t abolish it. They are merely bourgeois (legal/permitted) forms of protest that attempts to appeal to the moral conscience of bureaucrats to treat prisoners in a more humane fashion. This only legitimizes the prestige of the state.

Of course, no one wants to see prisoners (humans) mistreated and abused. My critique is that none of these methods in and of themselves will bring about the destruction of prison/state. And that those on the outside are involved in legal forms of struggle while prison rebels are involved in illegal forms of struggle. Dissent while in prison is illegal and prisoners are at the receiving end of the state’s brutality, harassment, and retaliation.

We’ve had some bloody riots, deadly and brutal hunger strikes/work strikes, lengthy lawsuits, etc, throughout the years, but there are more prisons, more prisoners, and more abuse. None of the methods in the past has knocked a dent in the state’s armor. And I’d be remiss not to mention the notion that we shouldn’t use revolutionary violence. The thinking behind this is that if we use revolutionary violence, the state will gain an upper hand in the media and discrediting us as thugs, criminals, and terrorists. Fuck, the state always has the upper hand in the mainstream media outlets. The media is controlled by the state through big business, who is in cahoots with the state.

Since prisons are the most concentrated centers of authority, coercion, and control in society, it should be the point of attack, prison abolition should be at the forefront of any movement against authority and for freedom, and prisoners’ voices should have a prominent place in the movement simply because of their unique position. This is not about romanticism or adventurism as some would like to claim to justify their lack of action. Of course, no one can say what strategy and tactics will be successful in spreading revolt, but I can’t think of anything more clear than attack where it hurts. So, with all that said, I’d like to layout “Some Things to Do” that comrades should give serious thought.

Some Things to Do