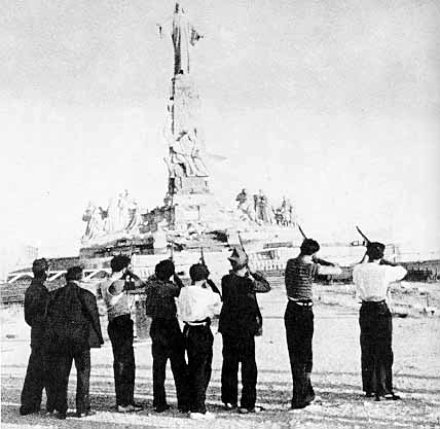 The ongoing recuperation and pacification program targeting rebellious prisoners here at Holman prison by the state and in collusion with outside religious ministries has prompted me to write about the absurdity of religion and the logic of submission it induces.

Most prisoners adopt some form of religious doctrine in the face of this unyielding onslaught against them by the criminal justice system in an attempt to make sense of the situation they find themselves in and in hopes that things will turn out in their favor, and as coping tools. Most have been socialized into religion before coming to prison, beginning as a small child. The pressures of poverty, oppression, and survival forced them to abandon ritualistic religion, but when they find themselves in prison, they revert back to their childhood religious instructions – that god has a purpose in life for them and to put their burdens in god’s hands because no one knows god’s design for the human being.

I’m called crazy for being a non-believer in god and religion, but I think it’s crazy to believe in religion and a god who is supposed to have created everything, knows everything even before it happens, is all powerful, all merciful, all compassionate and loving. Where’s the compassion from god towards creation and why punish your creation if you knew beforehand what your creation was going to do before they did it?

Take the story of Job, where god waged a bet with satan that Job would stay faithful to god even though god gave satan permission to use any tactic satan chose to turn Job away from god. Job suffered the loss of his wealth, his wife, sons, and for disease, but still continued to stay faithful to god. What kind of god, especially a loving, merciful, and compassionate one, would subject its creation to this brutal torture just to win a bet?

And why is god called “he” if god is without gender? Wouldn’t it be more proper to refer to god as an “it?” This is the absurdity of religion. “For god so loved the world, that he gave his only begotten son, that whosoever believeth in him should not perish, but have everlasting life.” (John 3:16)

This quote from the Bible is what modern Christianity claims to rest upon. This is a foundation of discrimination, bigotry, a foundation of coercion through the force of fear. Religion reduces everything to the binary dichotomy of evil versus good.

Religion is hierarchy. You have god at the top with absolute control and dominance. Then you have your angels, demons, humans, prophets, all organized by rank with animals on the lowest rank.

Religion has been used for thousands of years to control the minds and bodies of people in service of the state.

Here at Holman prison, where prisoners has been in continuous rebellion for the last year and a half, the state has launched an aggressive recuperative and pacification program in an attempt to quell all resistance and regain full control and order of the prison population of extremely rebellious excluded. The state has resorted to giving complete access for the entire prison population to the Browder Ministries whenever the ministry so desires. This is unprecedented. This Browder ministry has been providing entire meals of foodstuff that prisoners in Alabama do not have access to such as pizza, turkey, steak, beeftips, salads, all kinds of desserts, etc.

The head of this ministry, Browder, is an ex-chaplain of one of Alabama’s prisons and has a reputation of really caring for the prisoner. But I’ve only heard a message of compliance and submission to the pigs. There has been mobile prayer sessions started that goes around to each dorm and prays daily, baptisms in the dorms, candy passed out late at night on the weekends, talent shows and picnic style affairs all sponsored by the Browder ministries. This is an aggressive attempt at recuperation and pacification. Whole dorms have been transformed into “Faithbased” and “New Beginning” dorms, all organized on the ideas of this ministry.

Prisoners get used to this quality of food and, of course, don’t want the weekly passing out of candy bars and other small treats to stop. There may be something a prisoner can trade for cigarettes, drugs, etc. It’s not much, but prisoners have become dependent on it that they don’t want it to stop. So, in order for it not to stop, prisoners allow this ministry to seduce them to go toward what their very nature squirms against: the submission to tyranny.

Religion has always been used as a tool of the King, Queen, and state because religion denies individual agency and has one dependent on some outside mystical force called god, and denies the individual the ability to effect change.

Religion is not about freedom, it’s about slavery and the suppression of desires.

This ministry has solicited the aid and assistance of the leaders of one gang who have taken this as a cue to operate however they choose to as long as it’s supported by the ministry. They have beat, stabbed, and thrown out all the queer prisoners in the “New Beginnings” dorm because they say it’s an abomination to god, immoral and against what the bible teachers.

Religion is dangerous and must be combated.