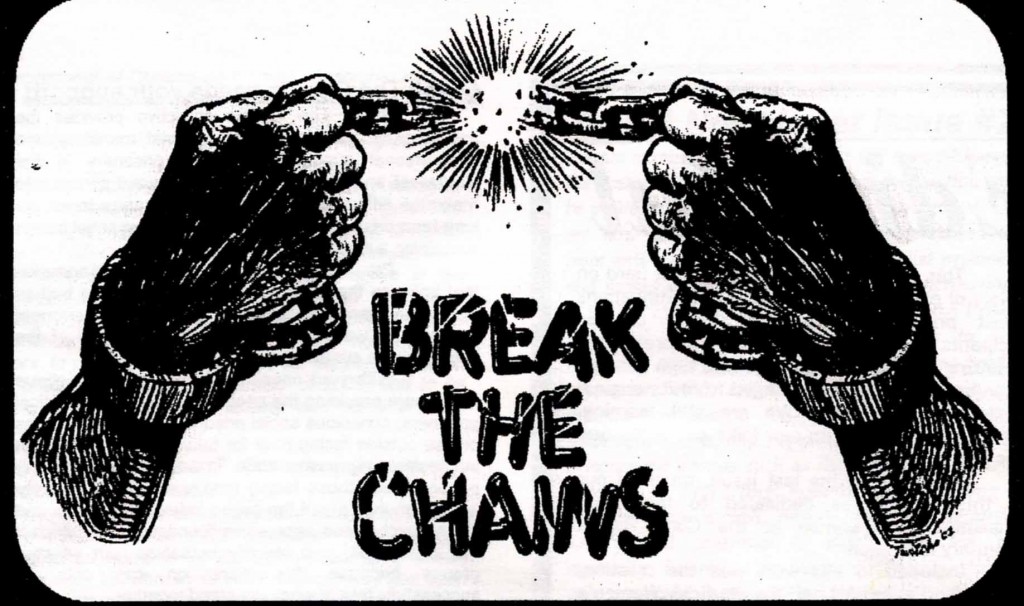 In January 2015, as prisoners in Alabama begin to discuss launching another work strike an building communication and support with outside comrades, I submitted a few questions to one of the organizers within the Free Alabama Movement (Holman). Here’s the questions I submitted and here’s his answers.

ANARCHYLIVE: Could you tell me a little about your life, age, sentence, and affiliations?

FAHAMIVU: I got locked up when I was 18. Well, locked up this time when I was 18. I have been getting locked up my whole life really. This time I was sentenced to Life Without the Possibility of Parole (LWOP). I have been doing time on this since 2006. Throughout my existence (life) I have always been rebellious, but when I was twelve I went down for the Gangsters Disciples (GDs) and that’s when my action went from misplaced rebellion to criminal. The people whom I associated with and the older GDs we looked up to didn’t live according to the laws of our leader Larry Hoover. I wasn’t introduced to his vision until many years later. We came up in poverty and the guys who were living the best were the ones selling dope and robbing so that’s what we started doing. Fast forward through a life of crime, here I am at Holman.

AL: I know you are a member of FAM as I am, but what are some of the things you think could/should have been done to make the January 2014 work strike more successful?

F: Yeah FAM, you know it’s Free Alabama! Free 1 MO! Freedom or Death! And Fuck the DOC! All day, every day!!! As far as the work strike goes, I think the preparation and execution could have been a lot better. For the first few days it was as if we were just going with the flow, with little to no organization in some cases. So, in the beginning guys didn’t really take it all that seriously. But on January 1st at 1:00 AM we performed the first demonstration in C-unit. By C-unit being the kitchen dorm they would be the first people to go to work for the day. We stayed up all night yelling “Free Alabama!” and making it known to everyone in the dorm that there would be no working tomorrow, and that if you left out of the dorm to work you may as well take your property with you because if you tried to come back in the dorm from working we were going to beat the brakes off your ass! You already know C-unit is known for being one of the wildest, youngest, and arguably the most violent dorm in the camp, so for the young guys in this dorm it was right up our alley. The police tried to threaten and intimidate some guys into going to work in the beginning, but we defended them and made it clear that we would whip their ass if they tried to make someone go to work.

Sometimes this included just talking to them, other times it involved us throwing things and physically forcing them out of the dorm. We started turning off the TVs periodically during the day to gather everyone together and share opinion and visions for the demonstration so that we would all stay on the same page. This created a unity in us like I have never experienced in any form of resistance I have participated in or witnessed. But it didn’t catch on in all of the dorms, with the exception of B-unit. And that is what ended the demonstration. The other dorms allowed the people we kicked out to go back and forth to work from their dorms. They wasn’t really dedicated to the movement. If we could have gotten at least 10-15 guys in those dorms to enforce the no-work policy I think we would have made a much larger impact, if only just be able to sustain the demonstration longer.

AL: What are your interests, what do you enjoy reading and what are you currently reading right now?

F: I was raised in a household that promoted Afrikan Liberation, but I didn’t take my folks’ views seriously until I came to prison and started studying my history for myself. I developed a passion for Afrikan history and culture. Books like “What They Never Taught You in History Class,” “Nile Valley Contributions to Civilization,” and “Destruction of Black Civilization” impacted me the most in this regard. But when I started reading books like Assata Shakur’s autobiography and Geronimo Pratt’s book I became aware of the FBI’s COINTELPRO. This is when I began to become radicalized. Before coming to segregation on the stint I’m doing now I became aware of the Ferguson rebellion, but I received detailed info of the anarchist element in the demonstrations when I got back here; I have been reading lots of anarchist literature. Some that have made the biggest impact on me would have to be the English translation of texts from the group Os Cangaceiros, Against Innocence by Jackie Wang, and many texts by Russell Maroon Shoatz. Some of the latter I am currently reading.

AL: As a member of the GDs street organization (gang in government vernacular), what role do you see the GDs playing and can they, will they?

F: As a member of the GDs I see us having the potential of playing a major role in liberating our community of the aggressive forces currently repressing them, but no bigger role than the Crips, Bloods, ATOs, Park Boyz, or any other hood-based organization. We must all first realize who the real opposition is. Only then can we formulate a plan to rid ourselves of their control. We must educate each other. This all started with reaching out and forming a bond with people in these organizations so they will even listen to what we have to say.

AL: Are you excited by the Ferguson rebellion and what lessons have you learned from it?

F: I am extremely excited about the Ferguson rebellion!!! It has taught me so, so much! From an anarchist point of view, it was/is magnificent. To see people liberate themselves of police oppression by forcefully taking power away from them was inspiring. I was already hip to the occupy space movement, but I never took it seriously because I hadn’t witnessed it used so effectively until Ferguson. What set Ferguson apart from other similar demonstrations like the Oscar Grant Plaza demo in Oakland in 2011 was the demonstration being held in a residential neighborhood that was already unified and disgusted by the police. And the players. When people decided to occupy a space they get to regulate who is allowed in or out of that space for as long as they occupy it. They tactically used this to rid their neighborhood of police presence. So, what’s to say they couldn’t permanently achieve this?

AL: As a young Black male, what do you think it will take to get more young Black folks involved in the struggle?

F: Education. Or rather re-education. We have been misled into believing that we are each other’s biggest adversaries. But one thing about the truth, once you are exposed to it you become inspired to act upon it. We must first convince the Black youth that they have been led astray, then they will take action as they see fit. I don’t think we should tell them what to do, but rather, explain the pros and cons of different demonstrations and allow them to choose a course of action. They will most definitely come up with ideas of resistance that are new and effective.

AL: What do you think needs to be done or can be done to advance not only the prison struggle, but the overall struggle on the outside?

F: I think the prison struggle is at the heart of the outside struggle, because prison is the main threat used as a weapon by the state to keep the masses in line. We need solidarity from people on the outside to magnify the effect of our demonstrations on the inside. Not only does solidarity encourage guys in here to continue their struggle, but it serves up results that we would never see from us just bucking by ourselves. Cell phones were a big factor in the advancement of prison struggle because they allow us to take control of communication of what really is going on and away from the prison officials and the media, and to build and engage in solidarity in real time.

F: I think the most important thing they can do to aid us is keep in constant communication with us because they can assist us in many ways. The relationships they build with us should be ones of comrades and friends. They shouldn’t dictate, but listen to our needs and be honest about what they are able and willing to do.

AL: From your point of view, from the Ferguson rebellion to the Oakland rebellion, Black Lives Matter, FAM, the Georgia prison rebellion, the California hunger strike, where do you see the trajectory of all this anger going?

F: Well, in my opinion the anger has always been there. It’s just that now people are organizing more to demonstrate their discontentment. But this organization must evolve in order for demonstrations to have a revolutionary impact on society. I envision people communicating through social media and organizing a mass demonstration in solidarity with each other’s struggle. Our collective anger unifies us. Once we recognize that we will begin to identify with other people’s struggles and unify to continue each other’s struggle. Unity is the biggest weapon we have against our oppressors. They like to keep divided so we can be more easily dealt with.

AL: We know that the police are an occupying force in our hoods: what can folks do to deal with that and get them out of the hood, keep them out?

F: There’s so much separation in the hood because of stupid beefs between different groups. We have to stop battling each other because that distracts us from the real war being waged against us. We need people that are influential in the hood to educate on how all the shit pitted against us are connected and used to destroy us so we can wake up and realize who the real enemy is. The police are the most important aspect in this system of attack because they are the ones charged with forcing the masses to comply with the will of the state.

F: The FAM is networking with prison rebels in Mississippi and a couple of other states. But I think we need to do more of that and build a unified prison movement so we can coordinate a more powerful resistance to the state. Free Alabama! Freedom 4 All! Freedom or Death! Ain’t Nothing Else! Fuck the DOC! Fuck the State!

Show this comrade some love and light. Check out his postings on “anti-media.”
To contact this rebel, write to him:
Derrol Shaw #255703
Donaldson Corr. Fac.
100 Warrior Ln
Bessemer, AL 35023-7299
[address letter to Fahamivu Amon, envelope to Derrol Shaw]